Full content of two stories from the Deseret Morning News, latest developments in the case of Nancy Workman and alleged improprieties with county funds.

Council puts her on leave, appoints an acting mayor 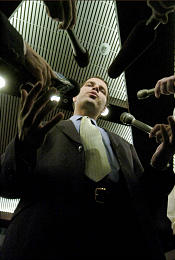 Deputy Mayor Alan Dayton talks to the media before being sworn in as acting mayor of Salt Lake County. (Michael Brandy, Deseret Morning News)Salt Lake County Mayor Nancy Workman was charged Tuesday with two counts of misusing public monies—one a third-degree and the other a second-degree felony—and placed on paid administrative leave.

"It is always difficult to charge a public official with any wrongdoing," District Attorney David Yocom said in a press conference announcing the charges, which were filed in 3rd District Court. "However...I have a responsibility under the law to charge the criminal conduct the evidence warrants."

Workman said she will fight the charges and refused to withdraw from her re-election race.

"I have acknowledged since the beginning that I could have and should have followed different procedure in accomplishing what I considered to be a very worthy goal...," she said in a statement. "But, recognizing my own mistakes, my conscience is clear in terms of any criminal allegations. I know I will be fully vindicated."

The charges are the culmination of a months-long investigation dating back to May, when Yocom received a whistle-blower complaint dealing with a health department employee. The employee was being paid but no one in the department, including her ostensible boss, knew what she was doing.

Yocom's investigators discovered that the position, filled by two women in turn over the course of about a year, was for accounting work at the Boys & Girls Clubs of South Valley under the supervision of Workman's daughter, Aisza Wilde. Workman herself signed their timecards.

A bipartisan panel of prosecutors from other counties, convened by Yocom to screen the evidence, concluded last week there was "sufficient credible evidence" to support two felony charges and one misdemeanor charge in the matter. Among other misconduct, they said Workman lied to investigators and her own staffers.

As most observers expected, Yocom closely followed the panel's conclusions, minus the misdemeanor.

Yocom said he sees no conflict in his office prosecuting Workman, though he said he would appoint an independent special prosecutor if she requests it. 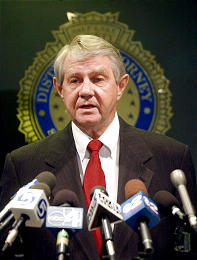 District Attorney David Yocom announces that two counts of misusing public funds have been filed against Mayor Nancy Workman. (Michael Brandy, Deseret Morning News)The council is required by law to place on leave any county official charged with a felony. Dayton, who will serve until the charges against Workman are adjudicated or until another mayor takes office, said he will not substantially change the direction of the county while he is at the helm.

"I consider this still Mayor Workman's administration," he said.

Democrat Yocom is enjoying a measure of vindication with the panel's conclusions and the filing of the charges—a far cry from two months ago, when a group of Republican leaders held a press conference in which they likened him to, among other things, former Sen. Joe McCarthy, whose infamous hearings to expose Communist sympathizers ruined people's careers.

State GOP chairman Joe Cannon, former Congresswoman Enid Greene, County Council Chairman Steve Harmsen and others said Yocom was a "hypocrite," a "political bully," that he was "lying in wait" to damage Workman, and that his investigation was "outrageous."

Having read the panel's conclusions, Harmsen Tuesday said his attitude toward Yocom had changed, and in fact said he "applauded" Yocom for the way he has handled the matter.

"I want to apologize for that press conference and the metaphors that were used," he said.

Yocom himself reiterated his contention that he was not politically motivated.

"It was done completely within the law and with no regard to political parties," he said.

Whether he wanted it or not, Alan Dayton has ascended to the top spot in Salt Lake County.

Sworn in Tuesday afternoon as interim mayor while his boss, Mayor Nancy Workman, is on paid administrative leave, Dayton moves to a starring role that he never really wanted, especially this way. Workman was placed on leave by the County Council after District Attorney David Yocom filed two felony charges against her.

The legislative body of Salt Lake County witnesses as Deputy Mayor Alan Dayton is sworn in as acting mayor by Sherrie Swensen, Salt Lake County clerk. (Michael Brandy, Deseret Morning News)"I just wanted to get through the year and find a good job after everything was done," Dayton said prior to his appointment by the council.

Despite taking the top spot, Dayton said he does not plan to drastically change the policies of Workman. Instead, he will try to return the focus to the county's core purposes.

"I consider this Mayor Workman's administration. I'm not going to move into her office or put my name on the door," Dayton said after being appointed Tuesday. "I'm just going to do the best job on this for as long as I need to do it. I would really like to see county government have a sense of stability and peace over the next few months."

Since being hired in 1997 by County Commissioner Brent Oversen to work on special projects and, after passing the bar exam, as a counselor for the commission, Dayton has thrived on operating behind the scenes. When Workman hired him in 2000 as her deputy mayor, he began representing the county at the Utah Legislature, where he helped push through legislation that gave the county fire department the power to become a special district with taxing authority and gave counties the right to competitively bid on ambulance service with private providers.

He has also butted heads with county prosecutors, including Yocom's office, which investigated fund raising by a political action committee formed by Dayton and Workman's intergovernmental affairs director, Geraldine Shaw, before the PAC was registered with the county clerk's office. The case was eventually forwarded to Salt Lake City prosecutors, but no charges were filed because the County Council changed campaign finance laws to make such offenses infractions instead of misdemeanors.

Dayton was also charged with three misdemeanors in Ogden city in 2000 because he warned motorists of a speed trap by standing on the side of the road holding a sign. The charges were eventually dismissed by a judge, who ruled that they violated his right to free speech.

Although better known to county insiders and fellow government officials, among those who have worked with him there is little doubt about Dayton's ability to run the county.

Councilman Randy Horiuchi, a Democrat and former commissioner, said he has immense respect for Dayton. Putting him at the helm was an easy decision, and the support for him was evidenced by the unanimous council vote to appoint him.

"Alan's one of the brightest people I've worked with in my 12 years at the county," Horiuchi said. "He'll do a good job taking over for Nancy, although I don't think he'll stray too far from her principles."

"He's very good to work with, and I think that the county will be in good hands until a new mayor takes over," Walker said. "He'll keep a steady course. He's very capable."

Full content of two stories from the Deseret Morning News, latest developments in the case of Nancy Workman and alleged improprieties with county funds.