I was pleased to see the SI.com article detailing Ichiro Suzuki's record-breaking 258th hit of the season.

Even better: He did it during the Mariners' 8-3 victory over the Texas Rangers.

Best yet: It was a Mariners home game. Ichiro broke the record in Safeco Field, so Seattle fans could have a chance to see it right in their own back yards. 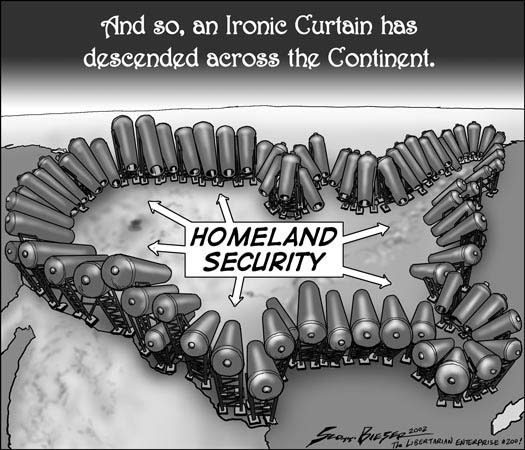 Stumbled across this Scott Beiser cartoon at totalitarianism today. Click the image to view full-size in a new window.

Randomness from the Seattle trip

Idahoans: Those little “Support Our Troops” ribbon stickers you’re pasting all over the rear ends of your vehicles? Stop placing them so the text reads horizontally. That makes the bow angle up and to the right, and it looks stupid. The bow’s supposed to be vertical; the text is supposed to angle up. Have you not watched any Hollywood awards shows or seen any politicians lately?

Boise has more people in less space and is growing faster than Salt Lake City.

I definitely have to move again. <grin>

Anyone know why semi trailers are standardized at 53 feet long? I've wondered this for years and could research it myself, but I don’t wanna.

It’s strange to drive through a small town like Sunnyside, WA, 35 miles southeast of Yakima, and see a highway exit sign reading Port of Sunnyside.

I don’t remember seeing any waterways as I passed through town, but I wasn’t looking until I saw that sign.

In northern Utah there’s a hamlet nestled in a valley along I-84. I don’t recall what milepost is nearby.

At any rate, this hamlet is imaginatively named: Valley.

My Garmin Map 12 GPS device calculated my maximum speed for the entire trip at 103 mph. I know my actual maximum was 87, according to my speedometer.

The Map 12 makes amusing mistakes of this type every now and then. For our trip to the Bay Area in October 2002 (we scattered my grandmother’s ashes near Monterey), the max speed showed as 339 mph.

I’d certainly like to go that fast sometimes, but I don’t think my Saturn would survive the trip.

Another trucking-related “I wonder...” topic from the drive back to SLC yesterday:

I passed several flatbed trucks and tractor-trailers with large loads secured by wide web straps flung over top and attached on both sides of the flatbed. I’ve yet to see a load secured this way where the straps were NOT twisted as they went up one side or the other of the load.

Is there a reason why the straps are twisted when they’re strung over loads like that? Does it give the straps added strength or something?

How can drivers on I-405 southbound in Bothell (at the 527 interchange) fail to see a large fire truck and an ambulance approaching with lights and sirens blaring when the sun’s not even up yet?

The number of drivers who don’t get that the left lane of a two-lane divided highway is for passing—not for settling in and driving like my grandmother—is rapidly increasing.

My high-beam switch got a workout yesterday as I started flashing these people to get them the hell out of the way rather than passing them on the right.

Idiots. Learn the rules of the road!

I was sending a lot of text messages as I zoomed across four states yesterday. Had to teach the phone several new words as I went—mainly place names (Ontario, Snoqualmie), but a few adjectives as well (can't think of any of those right now).

I was talking about this in an IM with Bug just now and it occurred to me that of the first 10 words I taught my phone, probably around half were curse words.

My phone didn't know shit, for example. I know I sent a few messages talking about shiv before I noticed I needed to teach the phone the proper word.

How many curse words have you taught your phone?

A poser from my recent travels

As I was driving back to SLC yesterday, I encountered a pair of words that seemed entirely unrelated but are in fact tied together pretty closely. I won't disclose where or how I encountered these two words; that'd give it away too easily.

Anyone have any idea how the words ARMY and CROW are related?

Leave a comment if you've any ideas. First correct response gets the pleasure of providing the correct answer. ;-) Officers from several police agencies and cadaver dogs have searched the landfill about four days a week since August.

It took just a few hours Friday before investigators were certain the remains were those of Hacking, whose husband has admitted to fatally shooting her, said Salt Lake Police spokesman Phil Eslinger.

Mark Hacking, Lori's husband, said he shot his wife in the head with a .22-caliber rifle as she slept and wrapped her body in garbage bags before disposing of it in a garbage bin, Salt Lake District Attorney David Yocom said in August.

Hacking was charged in August with his wife's murder, along with three counts of obstruction of justice. An arraignment is scheduled for October 29.

Yocom said Hacking confessed to his two brothers while he was being treated at a mental ward of a hospital in the days after the killing. Hacking also said he disposed of the body, the murder weapon and the mattress in separate garbage bins.

The district attorney said Hacking decided to kill his wife after she discovered he was not enrolled in medical school in North Carolina, where the couple had planned to move.

"The defendant stated that in the early morning hours of July 19th, he walked into the bedroom where his wife slept and shot her in the head with a .22-caliber rifle," Yocom said.

According to Yocom, Hacking also said he used a knife to slice up the mattress and discarded it in another garbage bin. The mattress and knife have been recovered.

If convicted, Hacking could be sentenced a minimum of five years to life in prison on the murder charge and one to 15 years in prison for each of the three obstruction charges.

The banner that began appearing on the CNN.com home page a moment ago (click to view full-size in a new window):

UPDATE 16:14: The Salt Lake Tribune's just put a link to their own story about the discovery on their main page.

This is a CEREAL?

My pleasure at Nancy Workman's difficulties knows no bounds.

Entire article with photos and graphics quoted below.

The Salt Lake Tribune has a "breaking news" story on this too, but the Deseret News' is better written and thus makes my cut for quoting.

Break in the Lori Hacking case?

I just heard a brief news tease on the radio, the discovery of what may be human remains at the Salt Lake County Landfill. As soon as I see something on one of the local newspapers' web sites, I'll post more detail.