Tags: bucket, Costco, icing, what the...

I have decided that every rainstorm is, for Seattleites—residents of a city with a (mostly undeserved) reputation for endless rainfall—exactly like the Deluge of biblical reference.

Tags: Seattle, weather, what the...

Lovely view of the blinds

Came in to work tonight to find my desk relocated.

Actually this is misleading. I had to move my PC, monitors, keyboard, mouse, chair, file cabinet. Only thing moved for me was the phone, it’s of those new-fangled IP telephony contraptions that has to be set up by a technician so the phone system knows where to send calls dialed in to my desk number, blah blah blah.

Anyway. Moved down the corridor from the group office I’d occupied since... must be, oh, January or so, to the former lounge area where my desk was located when I first started here back in December.

Nine months and two desk moves later, I end up three feet from my first workspace.

This lounge space has floor-to-ceiling windows with views west toward the parking garage. Charming concrete structure with bright lights for the night-time parking crowd. (No one does this at midnight.)

It will be nice, however, when my work schedule returns to daytime hours next week and I will see the outside world in daylight during work hours for the first time in what feels like decades.

Be weird to be here when there are actual people around. And the light from outdoors! But the blinds, too, very helpful.

In no particular order: 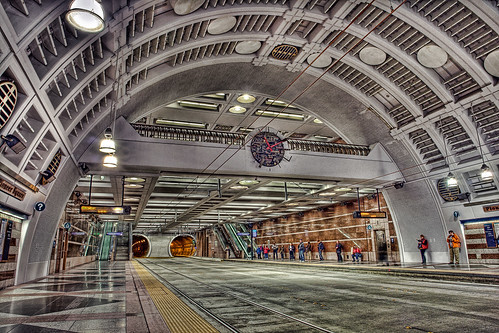 Normally I’m not a fan of the HDR technique, but in this case it makes a fascinating mix of surreal and detail.

Grocery store down the street. I used the self-checkout because the one staffed register had all seven other shoppers waiting in line.

Scanned items, placed in bags according to inane prompting by machine which, like all such installations, uses a woman’s voice similar to the “You now have six minutes to reach minimum safe distance” drone from Aliens. Finished scanning bar-coded items, placed small bunch of bananas on scale and typed PLU code 4011, which from years of grocery shopping and watching register operators at their task I have learned is the universal price code for standard non-free-range, non-organic, grown-by-underpaid-workers-in-the-clear-cut-jungle way-too-yellow-to-be-natural run-of-the-mill bananas from whichever vendor is least fashionable at this particular moment because agri-business is of course the scourge of our existence.

I reached for the “Pay Now” button on the touch screen, got prompted: “Do you have any coupons?”

I thought, That would be much more fun if it said, “You now have five seconds to give coupons to register attendant.”

Instead I pressed “No” and waited for the payment-choice screen to appear.

It didn’t, though, because I had in fact brushed my hand closely enough to the portion of the touchscreen devoted to the “Yes” answer that I had triggered the have-coupons response: “Please give coupons to the attendant.”

There was a small button at the bottom of the screen: “Go back.” I touched that, but it doesn’t really take you back one screen. It actually triggers a Level 1 Security Alert and locks down the register, helpfully displaying the legend, “Wait for Attendant.”

The attendant popped up out of nowhere like the Genie in Disney’s Aladdin, though no puff of smoke. Said, “Do you have coupons?”

“No,” I said. “I touched that by mistake.” I watched the screen at my station, waiting for it to release operation to me again so I could pay.

“You pressed the button that you had coupons,” the attendant said. Accusingly, almost, as if by pressing that button and immediately trying to cancel I was somehow attempting to cheat the store when customers can’t even scan their own coupons anyway.

“Yes, I pressed it by mistake, like I just said,” I said.

He touched his console, the Triple-Secret Code to release the transaction back to me. Watched me as I chose payment method, paid, pulled bags off the rack, walked out of the register area.

On the drive home I kept one eye on the rear-view mirror, the other on the road ahead, watching for the black cars that would indicate I had been Marked. For Surveillance.

No black vehicles, and no silent helicopters when I got home.

Saltines for breast-cancer awareness
Flickr: Don NunnKroger’s contribution to the month of events and products geared toward fund-raising and education.

If you use your cell phone as your alarm clock

Bonus, however, of late wake-up even on a wacko work schedule: Traffic-signal timing works greatly in your favor when you’re nearly two hours late for work.

Usually when I leave for work, I have to stop for traffic lights at some point along Mercer Street. Often that stop is at Mercer and Dexter Ave N. The rest of the signals along Mercer are timed so they turn green at about the same time as the light at the Dexter intersection, so barring slow or idiot drivers, I don’t have to stop again until I exit SR 520 at NE 51st St, where the signal timing has been changed lately to an interminable stop at any time of the day or night.

Tonight, however, I only had to stop briefly at the stop sign at the base of Taylor Ave N for the left turn to Mercer. Zipped down Mercer on all green lights, flew off 520 at 51st, happened to follow a vehicle already waiting for the left-turn signal.

I guess alarm-clock confusion translates to good traffic karma at least once in a while, eh?

Probably exactly why they’re in this predicament

Brief stop at the grocery store on my way home from dinner with Katharine.

One register open. Not unexpected, Saturday after 21:00 and there aren’t all that many people in the store.

Immediately ahead of me is a single man with what looks like ingredients for his family’s breakfast tomorrow—pancake mix, syrup, orange juice, and so on.

Ahead of him is a couple who are buying baby food, diapers, cigarettes, and condoms.

But they hit a snag.

The woman’s credit card has been declined. The transaction denial doesn’t give a reason for the denial, merely states the fact of it.

Woman turns to her boyfriend/spouse/whatever and says, “I’ll bet there isn’t enough money in there. We can’t buy everything. What should we leave?”

They sort through the items, linger a bit over the baby food and diapers, probably thinking of the hungry and dirty child (who must be at home, or maybe in the car... aaiieee).

They end up choosing the ciggies and condoms and leave the baby items behind.

how many protocols I may be violating when I check my Gmail account on my Palm OS-based Treo as I wander down the hall to the kitchen in a Microsoft facility.