What really goes on in the halls at Microsoft

Was part of an email thread with one of my coworkers about the identities of my coworkers in a photograph and the movie 10,000 BC (not related, but somehow we were discussing both topics) when the subject shifted abruptly to his recent loss at Nerf Wars.

No traffic for you!

This past weekend was one of those unusual times when I was on call for work, family and friends were out of town, some plans I had in the works ended up not happening, and a friend moved. Then Katharine got home from Europe to close everything out.

It was an odd mix of quiet and insane.

A couple changes, either recently made or about to be done.

Not at all bitter here

Not at all bitter here
Flickr: Don NunnManagement and process difficulties? Never!

Clowns are not the issues

Clowns are not the issues
Flickr: Don NunnSuccinctly stated on a coulrophobe’s whiteboard

Damn, one of my favorite neighborhood spots. Though I hadn’t been there in a couple of years, despite being in Salt Lake three or four times each year and driving past the location at E Street and South Temple many times each trip.

Deseret News story after the jump.

Randomly on the way to work today

The Enforcer
Flickr: Don NunnCoffee-breakin’, actually. Which is good, because I’ve been parked along here much longer than the allowed 1 hour.

Three days in the life

In chronological order, though I won’t swear to that—even though I’m a complete time-keeping nerdly, I am a bit more casual about it on the weekends:

Are there any myths surrounding the spilling of a quantity of black pepper?

Because I just sent about two ounces of ground black pepper wafting across my kitchen when I was trying to remove the little plug at the base of my pepper shaker to empty out the pepper so I could wash the shaker. Damned little plug WOULD NOT GIVE IT UP, so I yanked.

No sneezing, thank God. But I only wiped up the spill. I didn’t toss any over a shoulder or make any wishes or weave my hands in the air to form any signs to ward off a pox or the like.

Downtown Seattle is gorgeous at twilight

Downtown Seattle is gorgeous at twilight
Flickr: Don NunnLast rays of light reflecting off the mostly glass buildings, with the moon hanging overhead. Doesn’t get much more beautiful here.

lightning through my camera
Flickr: SLOWLORISThis woman was leaning out a window with her hand on a metal railing to film a heavy rainstorm when she was struck by lightning.

Because you insisted, here’s the unedited screaming version. I also added video from a minute before the lightning struck so you can get an idea of how hard it was raining. From what i understand, it went through my left hand holding the camera, crossed my back and exited out of my right hand holding onto the metal railing. No entry or exit wounds, just a really good zap!

So many cliches
Flickr: Don NunnImage, text, ideas... the whole thing just SCREAMS “how Americans think all people from India actually are”

Four floors down
Flickr: Don NunnStraight over the edge of my balcony

Sunday afternoon
Flickr: Don NunnSeattle on a quiet day from my living room.

After the aquarium
Flickr: Don NunnSpent the early afternoon at the Seattle Aquarium with Katharine, Julie Anne, and Julie Anne’s brother, sister-in-law, and 2-year-old nephew.

Saw this on Julie Anne’s blog, figured I’d jump in too. 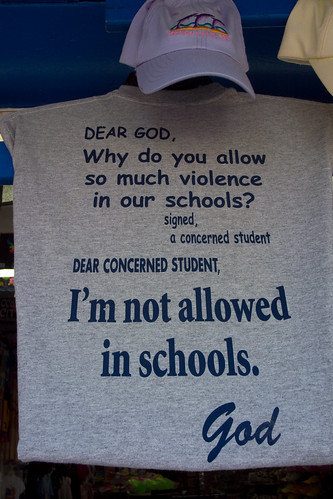 See, it’s funny, because my god is frighteningly spiteful and petty but has enough of a sense of humor to enjoy a novelty t-shirt
Flickr: gruberbwahahahahahahaha

How long do you take in the shower?
Submitted by Strive2Be GREAT movie. Funny, poignant, amazing animation—the realism at times was utterly striking, in fact the only times I really knew it was an animated film were when the humans of the future were involved.

Digital projection so the image was bright and crisp and the sound bone-shattering at times.

Pixar’s done it again. Definitely not a kids’ movie, which I knew from the trailers—sure they showed many of the funny moments, and yes it’s rated G. Not all G-rated movies are kids’ shows, however, nor are all R-rated movies really only suitable for people 17 and over. I think kids would do fine with this film, but it’s by no means directed at them the way Finding Nemo and Cars and other Pixar shows have been.

And I found it utterly appropriate that the entire movie-going experience involved absolutely no human interaction. Parking-garage entry, movie-ticket purchase and pick-up, parking payment and garage exit: All done by machines.

I’m disregarding the automatons who worked at the theater. They seemed machine-like enough with the ticket-taking (“Second door on the right” ::point::) and concessions (“Four seventy-five, please” ::grab::).

And Presto, the short film before the movie, was AMAZING. Funny as hell and fast-paced, the little rabbit had me in stitches a few times... all for want of a carrot.

Returned Sunday evening from five days in Salt Lake City, where I grew up and still have family and close friends.