Not quite what she expected 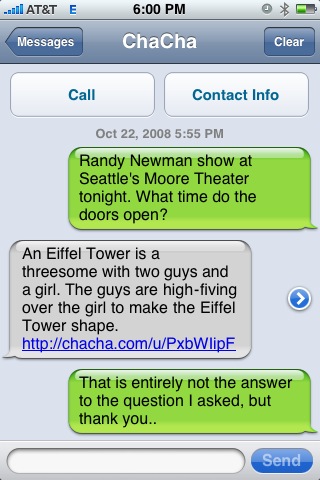 I’m part of a team that must be available 24 hours a day on weekdays. Right now we’re handling this mainly by having about half our staff in India, so they work during their daytime hours and we work during our daytime hours and to the world we present a single around-the-clock face, the magic of 11 people working wildly disparate hours in two cities on opposite sides of the globe.

Occasionally, however, glitches crop up in this system. Each country has national, regional, and local holidays, and we have to take these into account, though we often forget until the last minute.

So this week, while our teammates in India celebrated Diwali, I got to work graveyards for two days.

Today was the second of those days, which meant I left work at 09:00 and don’t have to be back until 06:00 tomorrow. I’ve been about ready to crash into the floor for the last four hours or so but I’m waiting until 21:00 so I can get a normal night’s sleep and try to get right back into the groove of the regular 06:00 day after two days of bass-ackward sleep/wake cycling.

I have the utmost respect for people who routinely switch hours all around the clock as part of their jobs. I did graves full-time from Feb-Oct 2007 and by the end it was KILLING me, and that was only graves, not switching until the last couple weeks of the contract I was working, and that was enough to bitch-slap me into a simpering puddle.

That I haven’t been a complete zombie the last two days is something of a surprise. Pleasant, too, though I don’t want that too widely known because I only have so much of the “I’ll be a good guy and cover whatever hideous hours we need covered” good-guy streak in me these days.

Busy week at the office, the week was that odd mix of “damn it FLEW BY” and some of the days just DRAGGED. How does that even work? Our perception of time just fascinates me, particularly of days when I perceive it one way and family or friends perceive it entirely differently.

In case it isn’t stupidly obvious, I haven’t slept much the last two nights. I have this mild cold, flared up out of nowhere Tuesday night. It hasn’t been at all bad as colds go, only a little sniffling here and there and so far the only times I’ve been congested are when I first wake up each day, but lately the strongest effect of even the mildest colds I get is sleeplessness, and when I do sleep, it’s a weird fitful experience, not very restful at all.

Doesn’t help that last night it was really 22:45 when I thought it was only, oh, 21:00 or so. I had planned to be in bed no later than 22:00 but didn’t make it until midnight because of the wacko time perception, so today’s 05:00 alarm arrived WAY TOO DAMNED FAST.

And I’m on call this weekend, which is its own particular level of hell—waking to the sound of a ringing phone has to be my least favorite experience of modern life—but I also have no plans for the weekend, which I find a comforting combination. If it’s a busy on-call night, perhaps I can sleep in daylight and adjust slowly over the weekend to the 00:00-09:00 schedule I’m working next week to cover for our offshore team’s holiday needs (about half our staff is in India), ahead of a quick road trip next weekend to Corvallis.

Busy busy, and a week ahead, I’m like the walking dead. If Halloween were tonight, I wouldn’t even need a costume.

Okay day at work, a bit busy this morning and then the day DRAGGED for the roughly 27 years between 09:30 and 12:15, and then it was a bit busy again in the afternoon to finish things out.

So home I went, normal commute with not much traffic (score!), couple quick errands on the way and when I walked in the door, I fell over a stack of recyclables and two cats because I forgot to take them (the recyclables) down to the bins this morning—actually didn’t forget at all, I chose not to take them down because I hate making noise at weird hours and I leave my house for work at 05:30, no one wants to be awakened by the sound of glass bottles clacking in their hideous high-pitched manner into the goddamned recycling bin—and when I stood up, I had a slight sore throat and a mild post-nasal drip.

Damned cold coming on! I think it’s actually the cold I thought I was getting a couple weeks ago, but that one never went anywhere, just camped out in my sinuses and/or lungs until it could spring on me as I lay prone with cracker boxes and Diet Coke cans and unread weekly advertisement-mail wads scattered about me and two cats fleeing in terror down the entry corridor. Its moment spotted, that dormant little cold pounced like 12 ninjas and now I am sniffling and my throat’s slightly scratchy and I’m out of night-time cold meds, but my head isn’t actually stuffed up, so I’m not going to the 24-hour Bartell Drugs nearby, it’ll wait until tomorrow.

The whole point of this was to mention that part of what I planned to do tonight was try to rescue my phone from yet another of its roughly quarterly calendar crashes, where my 10-year, 20,000-item-plus calendar gets eaten by a sync that fails because the computer crashes or the phone resets or the gods, enraged by my successful daily syncs over the previous 88 days, jealously wreak their vengeance and force the sync to fail, and the phone will never sync again after that. So I have to reset everything, set the phone to be overwritten in its entirety, a process that takes roughly 13 weeks and works maybe a third of the time.

Today it took only 90 minutes and worked on the first try. Possibly sympathy for the scratchy throat, but I have my doubts. I think it’s trying to gaslight me by making me think it’s on my side again, and three months down the line it’ll crash again, or next week it will burst into flame unprovoked, probably right as I’m trying to look up what movie I saw on Jun 11, 2003, after we had been at Tap House Grill and had probably more than a few beers before we saw... what movie was that again?

Taking a cue from verbatim, and since I actually have my iPod with me today:

Obviously I need to set my classical music so it doesn’t appear in shuffle mixes.

Care to answer a plumbing-vs.-behavior question?

When they designed the automatic-shut-off valves for the faucets in public restrooms, did they survey how long most people leave a faucet turned on to rinse the soap off their hands, and then design the valve to shut off a second or two SOONER than that?

Always—ALWAYS, I SAY—I have to trigger the stupid automatic faucets at least twice to rinse my hands fully, and I’m maybe 2 seconds from a full rinse when the things shut off.

Blargh. I loves me some Circus Animals now and then.

(10-08) 17:21 PDT — Mother’s Cookies, an Oakland institution for 92 years, has been shuttered, its owner seeking bankruptcy protection for the company.

The ending was abrupt: Workers for the company, which shifted its baking and distribution operations to plants in Ohio and Canada in 2006, told workers Friday that operations would cease and cookies would no longer be made as of Monday.

The company cited rising prices for raw materials and fuel, and on Monday filed for Chapter 11 bankruptcy in U.S. Bankruptcy Court for the District of Delaware.

The company that made Mother’s cookies at the end was the Archway & Mother’s Cake and Cookie Co. of Battle Creek, Mich. It was owned by Catterton Partners, a private-equity firm in Greenwich, Conn., which in 2005 purchased it from an Italian firm, Parmalat Finanziaria, which was plagued by scandals at home.

In 2006, Mother’s Cake & Cookie Co. was uprooted from its plant on 81st Avenue in Oakland and relocated. About 230 employees lost their jobs.

UPDATE: Kellogg’s bought the trademarks and recipes, but won’t take on any of the former Mother’s employees.

I have an irrational fear of lightning already, which stories like this DO NOT HELP:

BARKER, N.Y. — Authorities say a man filling up his truck at an upstate New York gas station was struck by lightning but survived with barely a scratch.

A surveillance camera at the K&K Food Mart in Barker shows the lightning bolt hitting the parking lot in a burst of smoke and orange light Wednesday. Forty-four-year-old William Hall is shown on the damp concrete near his pickup.

Hall says he was unconscious for about five minutes but felt the current travel through him before he passed out. His muscles are sore and he has slight blistering, but he says otherwise he feels fine.

Actually my fear isn’t entirely irrational. I have been within 20 yards of lightning strikes on four separate occasions in my life, though never struck directly.

Lightning is HOT. And LOUD. And VERY BRIGHT.

I’ve only broken one bone in my life, my left pinky during a game of fly’s-up in grade school. 4th or 5th grade, I think, but I don’t remember exactly when.

I had a hell of a time convincing anyone it was actually broken—it was only a hairline fracture and didn’t really hurt, it was just this strange sensation of warmth and a slight numbness for a week or so after it happened.

Some months later my pinky had developed a misshapen lump over the knuckle. Turns out bone had grown over the break while it healed, so my left pinky is lopsided now.

Have you ever broken a bone? If so, how?