Not quite the view we’ll have, but close

Friends and family joining me shortly for dinner and hanging out. At midnight we’ll crowd out onto my balcony to toast the new year and watch the Space Needle fireworks display from 6 blocks away.

It occurred to me a couple of days ago how much my life has changed in the last ten years, so I started pondering it a little more deeply.

In the last ten years, I have

Not remotely comprehensive analysis of the decade, but certainly some of the high (and low) points.

Here, then, some details to illustrate life’s unforeseen adventures.

Kinda weird day this has been

My Tuesday started out as a fairly dull day at work and ended with my subpoena as a witness in a criminal matter.

Way back in January, I was involved as a witness in a domestic-violence assault incident in my apartment building. I was the second person to call 9-1-1, and I ended up giving several statements over the course of the day. It was rather a harrowing experience as a witness—I can’t even imagine what it must have been like from the victim’s perspective.

In typical fashion, once all the hoopla had died down, the incident mostly left my conscious thought except for occasional reminders. I was asked to tell the story a lot over the next few weeks as I saw family and friends who knew about the whole thing, but hadn’t heard any details. But after those retellings, it faded from my immediate memory until occasional reminders like brief mentions in the newspaper came along. And most of those came fairly early on—here’s one from Jan 29 and I can’t find the article I’m vaguely remembering from midsummer sometime. When the six-month mark passed without further word from the police or the courts, I assumed it probably had been disposed by plea bargain or something along those lines.

Cue my arrival home today to find a file cabinet’s worth of subpoena paperwork taped to the building’s main entrance door. Seven total; mine’s the one on the lower right. 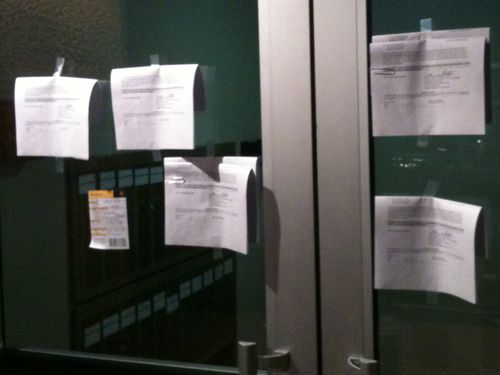 I imagine the recipient of that UPS InfoNotice was pretty intimidated by this display of summonsy goodness.

Anyway, yeah. Three pages of paperwork demanding my presence at the courthouse in downtown Seattle on or about January 25, which coincidentally happens to be the one-year anniversary of the attack.

So how was your Tuesday?

Tags: a day in the life, crime and punishment, King County, the courts, work

Bruises I can’t explain, and other bits about last week

I think it must have been... Tuesday? Wednesday, actually, now that I think about it. Anyway, when I noticed on my right forearm a large(ish) bruised area, maybe two inches wide. Hurt a bit when I pressed on it, that first day, but the second day nothing but discoloration.

This is one of those bruises I cannot for the life of me figure out how I got. I don’t recall slamming my arm into furniture or bouncing hard off any walls. Nothing fell on me or hit me within the last 10 days, and I haven’t been in a physical fight in well over a year. The bruise’s shape gives no clue to its origin—there are no faint outlines of baseball stitching or backward sports-equipment logo typography embedded in my arm.

But the highlight of the week was a weekend jaunt to San Francisco with Katharine and Julie Anne to attend a live-album recording show by my favorite singer/songwriter, Vienna Teng, and her frequent collaborator (and producer of her last album, Inland Territory), Alex Wong.

Fantastic time. We had VIP tickets for the Sunday evening early show at The Independent, got us some face time with the musicians while they were doing their sound checks. Also I’ve a newly signed poster I need to get framed at some point. It was a fascinating crowd, too, all ages (21+ only) and just about every type of person you could imagine, all clearly fans of the music and really into the show.

No idea when the album comes out, but I’m hoping to hear my voice among the whoops and hollers from the crowd. Maybe it’ll list where each track was recorded as well so I won’t be one of those fools who says, “That’s me clapping first,” only to be told that song was taken from a recording made in New York, where I’ve never been.

San Francisco was lovely otherwise. We flew in Saturday morning, took BART from SFO to Powell Street Station, checked into our hotel with no fuss (our rooms were available even though check-in time was still 4+ hours away), and were out wandering the city a little after 10:30. Spent the afternoon at the California Academy of Sciences in Golden Gate Park, marveling at the planetarium show and chuckling at the penguins’ antics and bemused by the free-flying butterflies in the rainforest globe. Beautiful building, they pack a lot into a relatively small space, but it isn’t at all claustrophobic—the exhibit spaces are thoughtfully laid out with plenty of room for people to move around, and the exhibits themselves are an engaging mix of old (dioramas, animal enclosures, blocks of descriptive text on wall signs) and new (Surface-style computer-driven information about the California coast and such, an all-digital planetarium with a 75-foot projection dome, a state-of-the-art living roof, the works).

We flew home this morning, allowed an hour for bag check and security screening and barely made it onto the plane for the 09:20 departure—and, as it turned out, only because the TSA agents handling the lengthy security lines were canvassing the crowds for departure times 40 or so minutes away at any given time. The bag-check agent had claimed a 45– to 60-minute wait in security; if we hadn’t jumped the line at the TSA agent’s behest, we would have missed our flight, and we had a bit over 60 minutes from bag-check finish to our entry into the security line.

The flight back to Seattle was packed tight. The Alaska Airlines check-in kiosk had even asked us if we would be willing to accept booking on a later flight (with a travel voucher to be used in the future) because our flight was overbooked, and the crowding aboard clearly indicated it would be a busy travel day all around. I think we ended up among the last half-dozen or so passengers to board, which meant that my laptop bag flew home overhead row 18 while our seats were in rows 23 and 24 (in a 27-row 737-400, oh joy).

We did get to enjoy the log-sawing stylings of the Western Conference Champion snorer. This guy could go pro, probably get taken high in the second or late in the first round. He had snorted himself awake five times before the plane was even off the runway at SFO, and several times during the flight—each time, his rowmates would all flinch with the surprise of it.

Sometime during this flight I also noticed the couple of bruises on my right upper arm, a couple of little quarter-inch dark spots on my biceps.

Seems parts of me were beaten senseless over the last several days and I’ve no memory of it.

Anywho. Back home now, all is good and I have a two-day work week because of the Christmas holiday—we get both Christmas Eve and Christmas Day off, for some reason I absolutely am not questioning aloud but still wonder about frequently. Bag is unpacked, cats won’t leave me alone, the wind is rattling my balcony door, and the weather forecast calls for rain and chance of snow tonight and tomorrow.

Just as things should be for December in Seattle. :-)

So how was your week?

The week in 17 syllables

Seems even more ludicrous when I write the numbers out:

Start flinging around numbers like these, makes me feel positively antique. And somehow “38 years old” seems so much younger now.

Wherein Don gets hot chocolate solely to warm his hands

It’s not cold in this room. I know this for two reasons.

First, I have photographic proof: 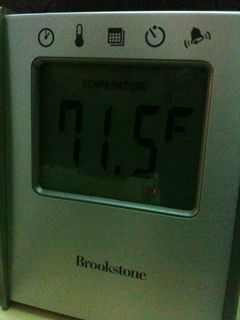 And second, I don’t feel cold.

But my hands do not know this.

My hands! They feel frozen and have for most of the day, dammit!

So, having achieved fluid equilibrium a few hours ago, that state where I must expel fluids at roughly the same rate I am consuming them, I went down the hallway a bit ago for a refresh of my beverage. And I thought:

Which I am now not drinking but am hugging closely to my person, in an attempt (so far vain, because I have taken my hands off the warm cup so I can type this post) to warm my poor frozen hands.

Also, earlier (and unrelated), I sneezed five times in a row. Best sneezes EVER.

So how’s your Friday?

For your holiday pleasure: Lighted boats on the weekend

Since we live in one of the more nautical corners of the planet, it’s almost considered mutinous not to watch a parade of brightly decorated boats every December. You have multiple chances to join in the salty holiday spirit this weekend.

View the full article on the Seattle Times site: Lighted boats will buoy up your holiday spirits

Glad I won’t be stuck in this tonight

Southbound I-405 out of Bellevue. 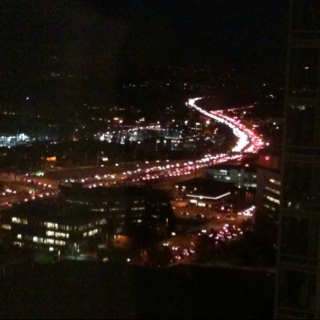 So today’s The Big Day.

Julie Anne and I sneaked into your office last night and did some decoratin’, complete to photographic proof.

We had to range far and wide to find the right combo of dry-erase markers for the faux confetti effect. ;-)

And then the desktop: 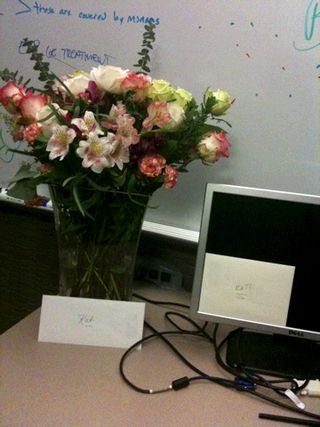 So here’s to the Big Four-Oh, and to many more.

Everyone else: Go wish Katharine a happy birthday at all of her sites....