Rather an unproductive first day

I walked into my bedroom just now with the sole intent of taking my shoes off.

When I walked out of my bedroom, I had opened the blinds and bedroom window, and turned on a fan. I still had my shoes on, which did not register on me until I walked into the kitchen and did not feel Purina Cat Chow gouging my toes.

This little vignette rather well describes my day at work, wherein I accomplished nothing beyond rebuilding a single Dell XPS M1530 laptop four times despite its repeated need to shut down without warning, I believe due to overheating. I would just get to a point where I could do useful work BAM shutdown, leaving the OS installation in a state of chaos it charmingly deems “improper shutdown”—really this is their code phrase for “gaslight the hapless user by making him run the recovery and diagnostics tools repeatedly”—off I’d go again, restore point in place and just get things set up BAM shutdown.

Somewhere in the middle of all that I managed to contribute peripherally to a couple of problem solutions, entirely by overhearing the conversations in our group work area. Though one of those solutions was really just a few ideas toward a solution—no idea if that one panned out, I gave up and left at 14:45 because I needed to call Dell technical support and my cell-phone battery was nearly dead, its charger lying 7 miles away (as the crow flies) on my desk at home.

The actually helpful (!) Dell technical support representative, who gave her name as Rachel in an attempt to induce in me a belief that she was from the upper midwest (most likely somewhere near Indianapolis) despite her obviously exotic accent, took over control my laptop from God knows how many thousands of miles away and rapidly determined that the problem was an old BIOS, along with two general drivers. But then she noticed I was using Windows 7, and the machine I have is supported only for Windows Vista, because her scripts don’t cover Windows 7. She could offer me further fee-based support, she’d be most pleased to do so!, but I opted to end the call and muddle through various BIOS and driver updates myself.

So far it seems maybe it worked. Laptop has been running for three hours now without a single heat-related sudden shutdown. No sudden shutdowns at all, in fact, only the 12 separate restarts required to install all of the OS and driver updates I found. And they don’t count because the installers warned me about ’em each time.

So yeah. Here’s hoping the remainder of the week is a bit more productive and a bit less technical-support-requiring.

Also I plan to wear no shoes.

The new* computer, she is a bit unhappy

Fired up the laptop to configure it for my own use. It went immediately into Startup Repair mode, which included warning me about the battery health and prompting me to initiate a system restore.

Now it’s in the 6th minute of Windows 7’s Startup Repair impersonation of a Cylon: 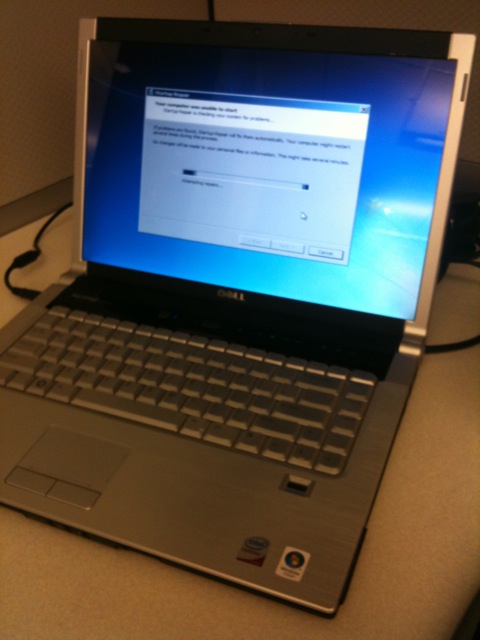 Quick weekend jaunt to Victoria, first stop is my favourite patio on the west coast. 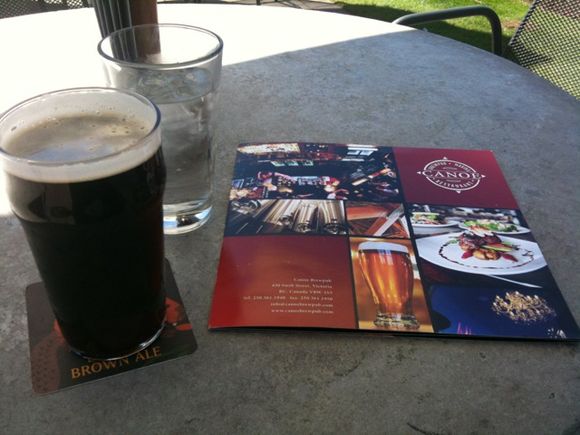 When you don’t yet have an officially designated workspace

Your coworkers make little signs to save your seat. :-) 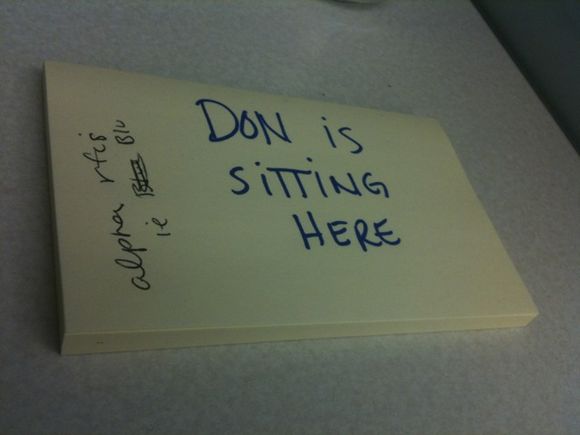 From the Ground Up | Molokai Dispatch

It takes a village — not to raise a child, in this case — but to build a home.

Molokai Habitat for Humanity’s latest project brought 15 volunteers hailing from the mainland to Ho‘olehua as a part of Habitat’s Global Village program. The team was here for 10 days and left early last week, after making substantial headway for a home currently being built for the Kaai ‘ohana. It is expected to be completed in two months. 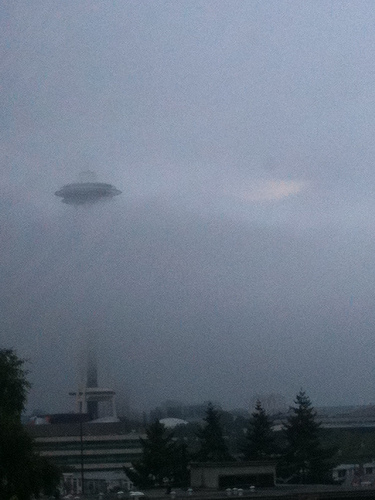 The Space Needle obscured by the morning fog that’s been part of our daily routine over the last week or more.

Another year closer to the next big milestone! And only a year younger than I am for the next four months.